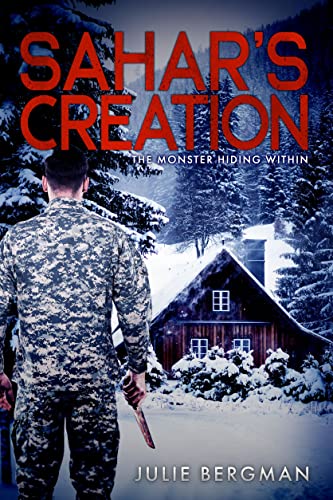 Sahar’s Creation: The Monster Hiding Within by Julie Bergman

Sex, drugs, and a serial killer that takes his victims back to a cabin deep in the woods. What’s not to love?

Air Force Sergeant Evelyn “Mac” McGregor spends most of her time defending airmen who commit petty crimes. When she lands her first murder case, it appears to be an isolated incident—but the more she digs, the more bodies she finds.

She teams up with the handsome First Sergeant Gavin Hudson to have a better shot at catching the killer, but their relationship soon turns into something more.

When Mac’s career and personal life are sabotaged, she discovers that the killer will do anything to throw her off his scent. No one will believe her unless she can reveal the killer’s true identity. But that will prove an even more dangerous task than she expects. Will she be able to save the killer’s next victim and her career?

An unputdownable military thriller about a serial killer gone wild, Sahar’s Creation is the first book in the Mac McGregor series. If you like fast-paced suspense that’ll keep you on the edge of your seat and female leads that never rest, then you’ll love this book/series by author Julie Bergman.

Sahar’s Creation: The Monster Hiding Within, is book 1 in the Sergeant Evelyn McGregor (Mac) series for mature adults. It’s an adventure full of murder, military suspense, legal thriller with law enforcement and a touch of erotica to keep things exciting. In the Air Force legal system there is one woman who will stand up for what is right at any cost.