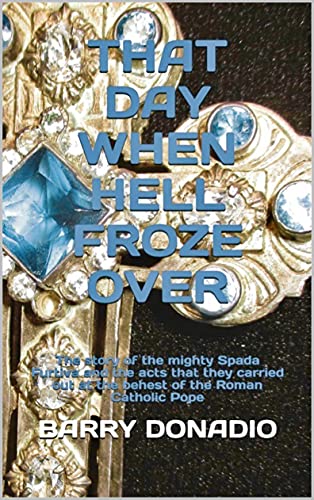 That Day When Hell Froze Over by Barry Donadio

Barry Donadio's brilliant book released in August 2019 "That Day When Hell Froze Over" is a fiction that takes place over a thousand years ago in present-day Afghanistan and Iran. It is a mystical story of warfare of that time with interesting characters. An elite force of catholic knights is ordered by the Pope to drive deep into enemy territory as far as modern-day Iran. The knights were the best trained and most discipline that the Vatican had at the time. The knights encounter many dangers along their expedition. The most dangerous group they encounter is a small group of female virgins from the region of Afghanistan. The knights are forced to battle the dammed of Hell, including Satan himself. After some setbacks in the battle against some of Satan's demons, the Archangel Gabriel appears and assists the knights with their battle. Satan becomes concern by the mounting losses of his troops as events unfold. Barry Donadio Celebrity Author