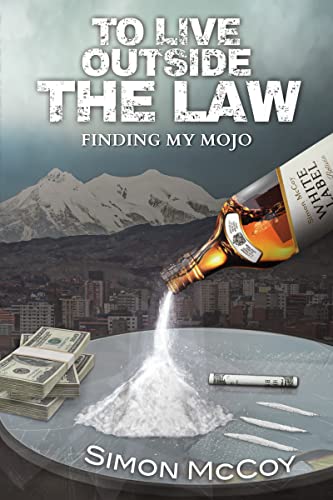 To Live Outside The Law: Finding My Mojo (The Bolivia Trilogy Book 2) by Simon McCoy

Simon McCoy smuggled Cocaine for longer than Pablo Escobar. An outlaw more than a criminal, he never handled a gun nor dealt with those who did.

‘Finding my Mojo’ is Simon McCoy's first book in the 'To Live Outside the Law' series of non fiction crime trilogies, an adventure that ran from the 1980's to the 2000's. Up until this point, Simon has got by through sheer balls and good luck. This true crime book marks the place where he decides to up his game.

Simon has a method that works consistently, and with reliable contacts, to a degree. With his new partner Stephen, a charming and witty man with parallel values, they skate over thin ice in style. Creating a credible front business, they slide their way through La Paz's straight and organized crime worlds. You will meet a range of characters and situations that will put you right there with them.

Experience the terror of picking up nine kilos of the world's best Cocaine in La Paz's shantytown and driving through the police roadblock on the way down to the city. Walking through the security controls in El Alto, the world's highest airport and Cocaine hotspot loaded with three kilos in plain sight.

McCoy’s stories takes the reader from five-star hotels and penthouses in Europe, the Caribbean, and the South Pacific, to jungle kitchens in South America, rondavels in Africa and favelas in Brazil.

While these extraordinary events take place and the drama unfolds, there are the more everyday challenges of living under the pressure of home and partners half a world away. In this world so far from South London and Rotterdam with its alien culture and people, the lads learn as much about themselves as they do about the wider world.